Angie Schmidt compiles a number of sources calling into question the traffic generation predictions relied on by local governments.  Link to: http://streetsblog.net/2014/12/12/whoops-how-planners-and-engineers-badly-overestimate-car-traffic/
at 9:03 AM

Email ThisBlogThis!Share to TwitterShare to FacebookShare to Pinterest
Labels: Traffic

Brick and mortar retail sales were down 7 percent on Black Friday last week, as shoppers continue the move to online purchases. Story at: http://www.npr.org/blogs/thetwo-way/2014/11/30/367564827/black-friday-sales-down-at-stores-surge-online.  Foot traffic last year was half of what retailers experienced in 2000, even as the economy recovered. Link to: http://www.forbes.com/sites/jeremybogaisky/2014/02/12/retail-in-crisis-these-are-the-changes-brick-and-mortar-stores-must-make/.
Parking regulations for retail are based on parking demand on Black Friday and the weekends before Christmas.  As retail continues its shift to the internet, the Instititute for Transportation Engineers--whose parking demand standards are adopted by local governments nationwide--ought to revisit its demand data.  Some are even making a pastime of photographing mostly empty parking lots on Black Friday.  https://mobile.twitter.com/hashtag/BlackFridayParking?src=hash
at 1:13 AM

For my thoughts on the City of Winter Park, please go to www.Facebook.com and click "like" at "Imagine Winter Park."  Link to: https://www.facebook.com/pages/Imagine-Winter-Park/302380836634990 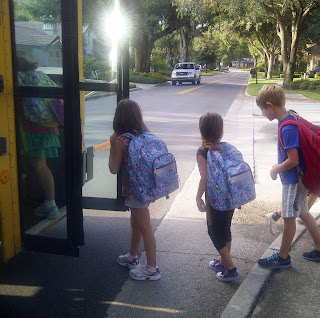 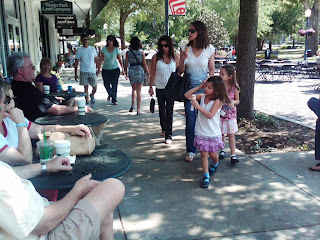 The City of Winter Park has on its October 27 Agenda a Settlement Agreement that, if approved, would eliminate the out-of-scale, and out-of-context billboards on the Ravaudage property, including the unsightly one at Lee Road and 17-92.  In exchange, static billboards would become digital (and more lucrative) along I-4 and a new digital billboard would be erected on Lee Road west of Ravaudage.  At first glance, it looks like a win-win for all the parties.  Here is a LINK to the Agreement.

UPDATE: The City Commission approved of the agreement.  One of the billboards on 17-92 has been removed.  W're awaiting on removal of the billboard at 17-92 and Lee Road.
Photos posted November 21, 2014 at:
https://www.facebook.com/pages/Imagine-Winter-Park/302380836634990?hc_location=timeline

FDOT can adopt a new Complete Streets policy.  Orange County can adopt a transit oriented development overlay district.  Yet we can still end up with 12 foot outside lanes--as wide as those on an interstate highway.

Here are the existing conditions on Orange Avenue in the vicinity of the Sand Lake SunRail station:

Notice the ten foot lanes and existing paved surface of 58 feet for a pedestrian to cross.  Orange County designated this a Transit Oriented Development overlay district by an adopted ordinance--Section 38-1085 of the County Code.  The Code envisions a more urban environment and states, "The intent of the TOD overlay zone is to...promote lively, pedestrian-friendly development that will serve as an attractive place to live, work, shop and recreate."  It further states, "Street patterns should be developed to simplify access for all modes of transportation and should be designed to serve vehicular traffic as well as pedestrians, bicyclists and transit customers."
Let's see if the re-design alternatives FDOT and Orang County are considering would "simply access" for pedestrians: 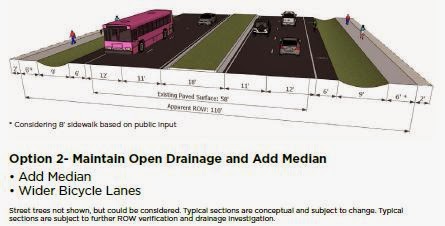 The option above is a typical Orange County "improvement": add a large median (so trucks don't encroach both lanes when making a U-turn) and increase the lane width from 10 feet to 11 and 12 feet.  Total pedestrian crossing distance will have increased 20% to 72 feet.  Motorist speeds will have increased about 10 miles per hour.   For comparison, Fairbanks Avenue next to Rollins College, also on the state highway system, has 10 foot lanes.  The narrower lanes handle truck and Metro bus traffic just fine and yet keep motorist speeds relatively tame and narrow crossing distances for students.

This next option above would create Central Florida's first "buffered bike lane."  Notice how the sidewalk is wider and more inviting.  However, now we've increased the median to 22 feet.  The pedestrian crossing distance has increased to about 86 feet--about a third wider than existing conditions. 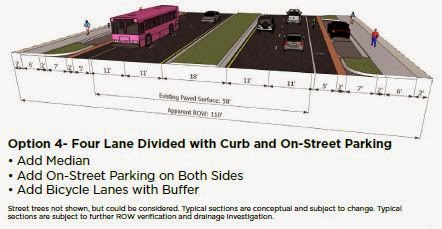 The option above may be the most interesting by including on-street parking--a rarity on the state highway system.  Parked cars tend to slow motorists, but that's not the goal here, with the wide lanes and median.  NOTE to FDOT: The buffer between the parked cars and bicycle lanes is insufficient to protect bicyclists from doors flinging open.

If the County is serious about encouraging transit oriented development in the vicinity of the SunRail station--and if FDOT is serious about its new Complete Streets policy--then the wide lanes and huge median do not belong here.   The goal should be to slow motorist traffic, not speed it up.

Here's a LINK to an article in Salon magazine about the resurgence of downtown Asheville, North Carolina.  We stayed in downtown Asheville with the kids last winter and found a thriving little City with great restaurants and night life.  The article explains the math, comparing tax revenue from the City's Wal-Mart to more appropriate downtown development on a per acre basis. 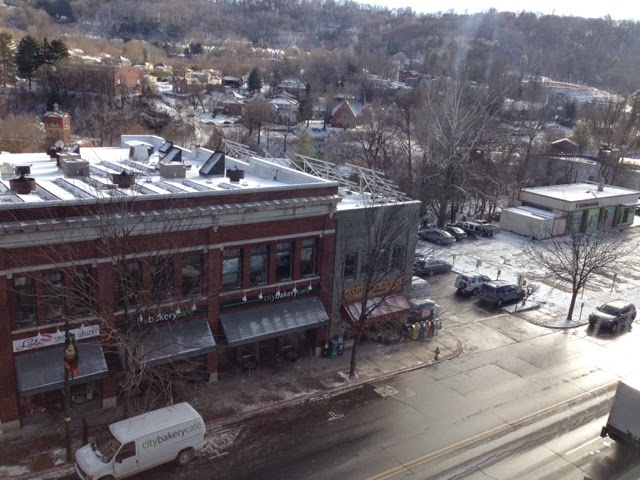 Downtown Asheville, NC - The buildings close to the street generate substantially more tax revenue than the suburban-form businesses, including those that tear into the urban fabric, on a per acre basis.
at 3:31 AM


This new policy is nothing less than an earthquake at FDOT.  The days of replicating the same highway system standards--4 or 6 lanes of 45 mph posted high speed traffic--without regard to the surrounding development (including dense urban business districts, houses, elementary schools, etc.) are hopefully ending. 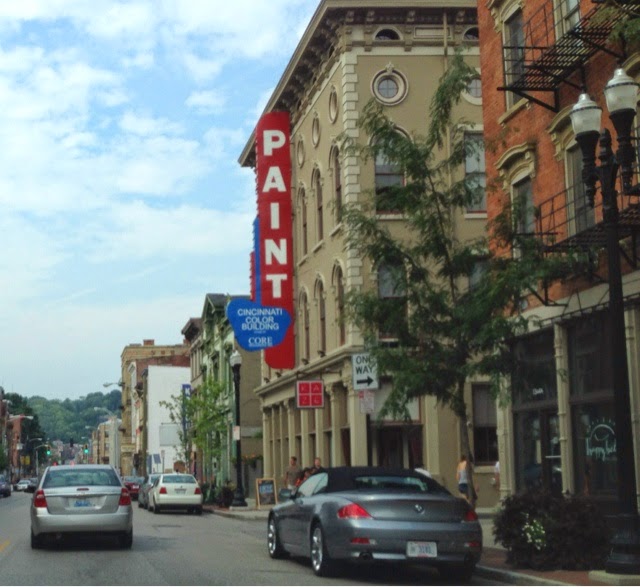 When I grew-up in Cincinnati, Over-the-Rhine had become the epitome of inner city decay and disinvestment.  Michael Douglas's movie, "Traffic," captured its reputation as a horrid inner city neighborhood, where his teenage daughter becomes a prostitute to pay for her drug addiction.  John Norquist, past president of the Congress for the New Urbanism, once noted to me that Over-the-Rhine's troubles began in the 1950's, when Cincinnati began ripping out its streetcar lines.

The City has reinstalled modern streetcar lines, with service expected to begin in a year.  A non-profit development company, 3CDC, strategically invests in buying and revitalizing old buildings, now the sites of thriving businesses, apartments, and condominiums.   Washington Park, once a home to the homeless, now attracts families with children from throughout the region.

My Dad took me on a tour of Over-the-Rhine over the Labor Day weekend.  The transformation from conditions that existed during my childhood is amazing.  When Graeter's Ice Cream, a Cincinnati institution, opens a location in Over-the-Rhine, something profound is occurring.
UPDATE 9/5/14: An entire block near Findlay Market is now slated for redevelopment.  Link to: http://m.bizjournals.com/cincinnati/news/2014/09/05/14-million-redevelopment-project-coming-near.html?ana=e_cinci_bn_newsalert&u=YhY%252FQfXAMCgNyFrEjw9v+w0e0d9800&t=1409940662&page=all&r=full

If Over-the-Rhine can revitalize, so, too, can Paramore in Orlando or any other inner city neighborhood stricken with disinvestment.  Seeing is believing.  Cincinnati's strategy warrants copying. 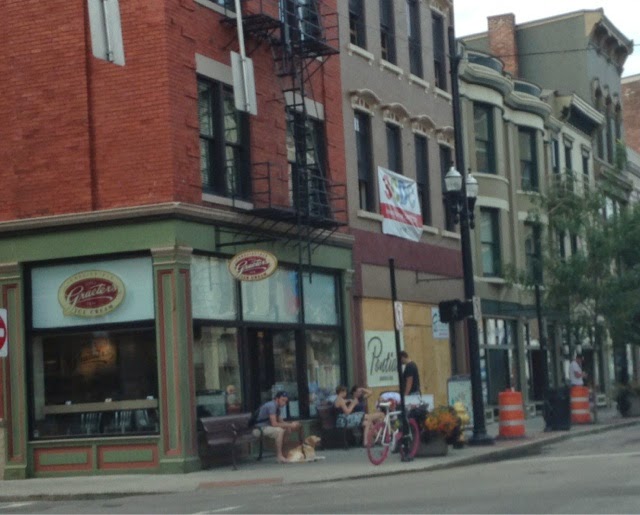 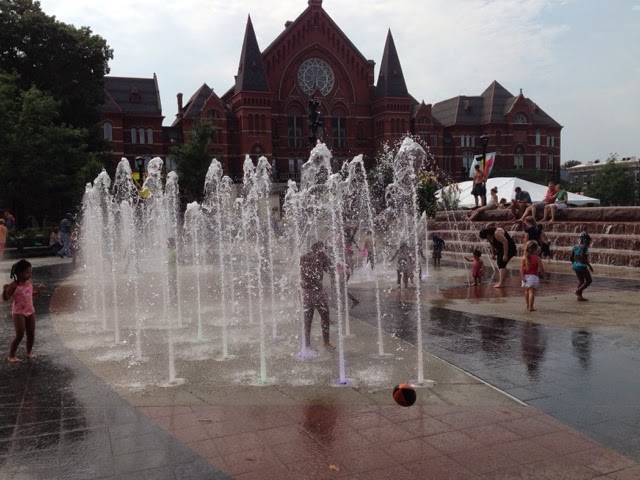 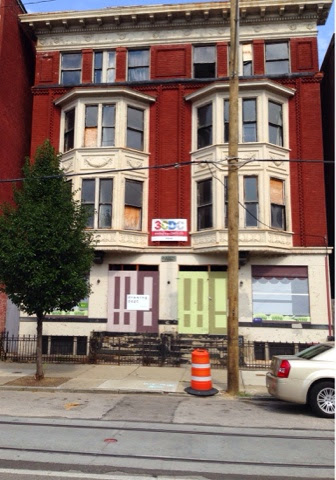 Another building undergoing revitalization by the non-profit developer, 3CDC, in front of the Cincinnati Streetcar line.  The line's permanence is hastening the area's improvements.

The Voodoo Science of Parking 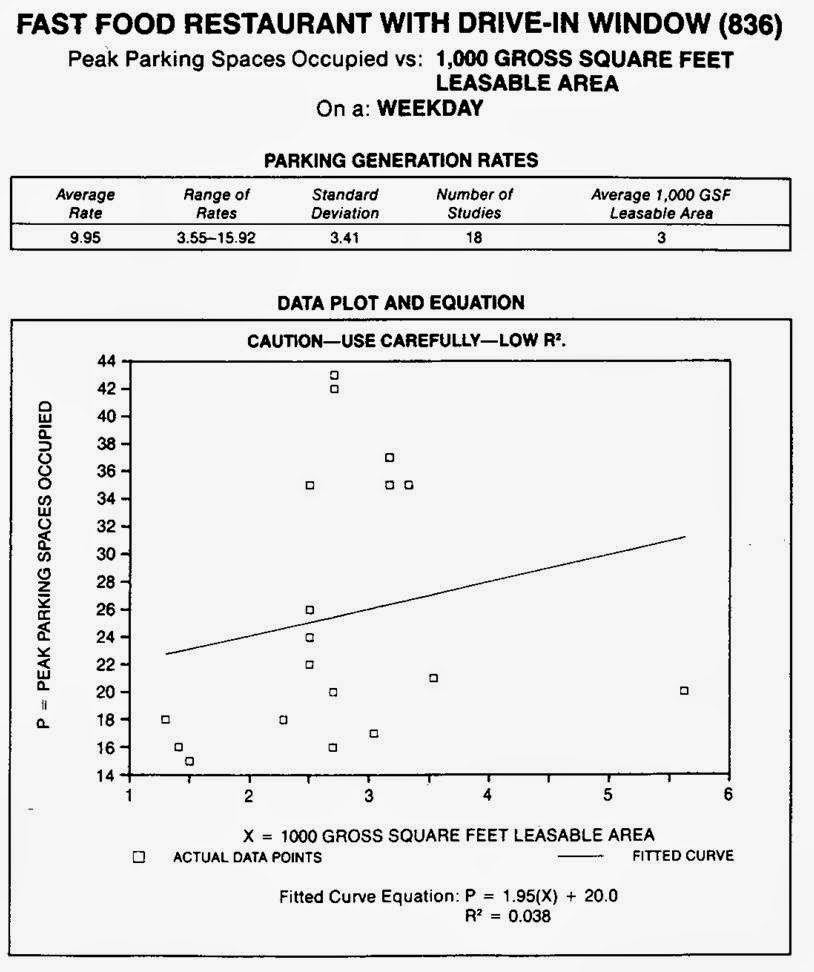 Each dot on the matrix shows peak parking demand in relation to the gross square footage of the restaurant, according to various studies.  Two restaurants, only 2,500 square feet in size, created demand for 42 and 43 parking spaces.  Yet another restaurant, 5,500 square feet—more than twice their size—created peak demand for only 20 parking spaces.  In other words, square footage poorly predicts parking demand.  ITE even acknowledged this with its disclaimer, “Caution – Use Carefully -- Low R2.”  However, ITE also drew a line on the matrix (a “fitted curve”), recommending that 2,500 square foot restaurants have no fewer than 24 parking spaces.  The line gives the illusion of scientific precision when, in fact, there’s none.  (If the studies showed reasonable predictability, the dots would congregate much, much closer to the line.)  Cities and counties adopt what’s recommended on the line into their codes.

That’s why I call this, “The Voodoo Science of Parking.”

Streetfilms posted a superb video about changes in Buenos Aires, one of the world's great cities, including a new BRT line through 9th of July Avenue (constructed in only six months), the expansion of cycle tracks (called "ciclovias"), a new pedestrian-only street, and bike share:

I visit Buenos Aires about once every couple of years and will look forward to seeing these improvements first-hand.