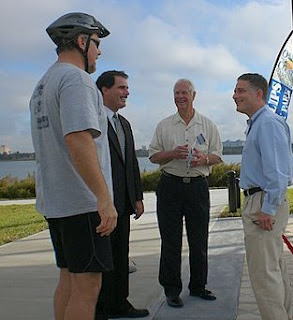 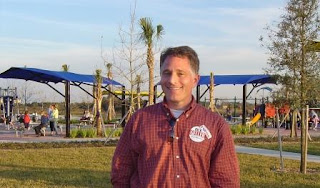 "Wow!" said Rick Geller, "this is the County's crown jewel of parks." Rick is a former Buena Vista Woods resident and now an Orange County Commission candidate for the seat Teresa Jacobs is leaving next year.

"Many people were involved in making this park a reality," said Robert Kelly, president of the Buena Vista Woods Homeowners Association, which borders the new park. "But in the beginning, when negotiations to buy the land from Dr. Phillips, Inc. broke down, two people in our community stood up and said that was unacceptable--our Coalition co-founders, Roy Messinger and Rick Geller."

"The Orange County real estate department drove the negotiations to a total standstill," recalls Messinger. "They wouldn't even agree to name the park after Dr. P. Phillips, even though the Dr. Phillips Foundation was willing to sell the land for one-third of market value.

Rick Geller and I were alarmed and we met with Dan Murphy, then chief of staff to Mel Martinez, the County Chairman. We gave a full presentation on why the County should buy this land for a park and why Chairman Martinez needed to get personally involved."

"Thousands of families were moving into new homes in the Dr. Phillips area without a park," said Geller. "The lack of planning was appalling, not only to us, but to Dan Murphy. He assured us he'd put this high on Mel Martinez's agenda. And he kept his word."

Mel Martinez personally negotiated the deal with Jim Hinson, president of Dr. Phillips, Inc. On June 8, 2000, Orange County closed on the purchase of the forty-two acre park site for $3.1 Million.


This news story was published by the Diamond Cove Homeowners Association, which is not affiliated with the Rick Geller Campaign. Reprinted with permission. Original article can be found by clicking here.