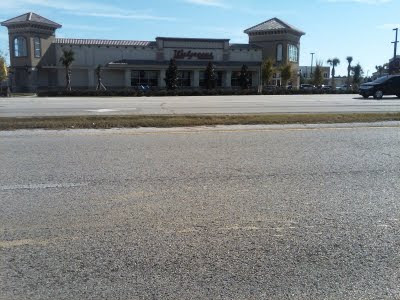 Horizon West Neighborhood Center Walgreen's--Cross a highway with 55 mph traffic for a tube of toothpaste? A pedestrian's daunting view. 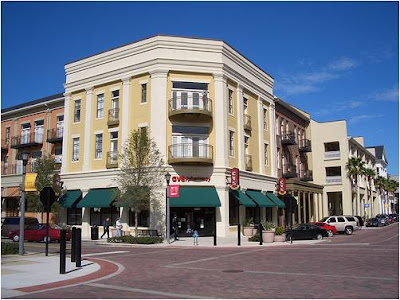 Baldin Park CVS--A drugstore in a true New Urbanist community to which people can walk or drive. In addition to on-street parking, a parking lot is behind the building. 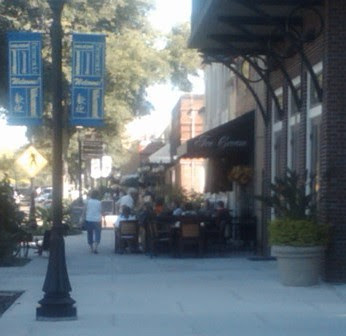 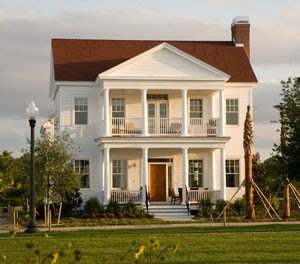 Home in Oakland Park with no garage in front. The garage is loaded from an alley, which improves the aesthetics. 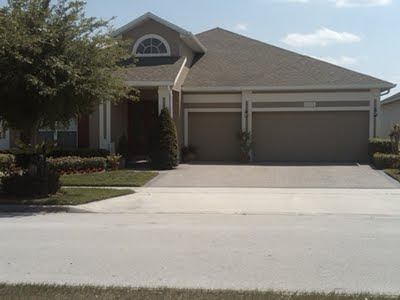 
Mike Thomas's column in yesterday's Orlando Sentinel describes accurately how Horizon West strays from the principles of New Urbanism. In my view, Horizon West's problems stem from drive-only suburbanism, not walkable New Urbanism. New Urbanism's guiding principle is to establish environments for the pedestrian--not six lane arterial highways with strip shopping centers. In a comment published afterward on www.OrlandoSentinel.com, Mr. Thomas clarifies, "It is the bastardization of the original intent of New Urbanism that I'm condemning."

I'm grateful that a strong consensus has developed in Orange County Government to improve Horizon West. My fellow Planning and Zoning Board commissioners and County staff (chief of urban design Jim Ward, assistant county attorney Vivien Monaco, among others) indulged me with dozens of hours as we re-worked the ordinance to eliminate loopholes, upgrade design standards, and provide incentives for mixed-use development off the arterial roads. The County Commission unanimously approved our revised Village Code last June on a motion by Commissioner Boyd, seconded by Commissioner Fernandez.

The Planning and Zoning Board backed me unanimously, and Commissioner Boyd and his fellow commissioners followed suit, when we refused to accept Seidel Road as another typical multi-lane arterial highway, cutting off the ability of people to walk between where they live, shop, dine, and go to school.


Developers have unlimited imagination when it comes to concocting real-estate scams.

Here at Horizon West, we see the latest one.

It is called "new urbanism."

Horizon West is a sprawling, fledgling 59-square-mile development in the boondocks of southwest Orange County. It should not be here.

Until a few short years ago, there was nothing here but swamps and dead citrus trees.

But the landowners got together to decide how best to get it paved. And they sold glassy-eyed county officials on ... new urbanism!

They would build self-contained, densely packed villages where residents would talk on quaint front porches, enter the garage through the back alley, and walk or bike to village centers and town centers to work and shop. No expansive yards to maintain, no ugly driveways emptying into the street.

And there was a precedent.

Only a few years earlier, the County Commission approved Avalon Park out in the hinterlands of east Orange County.

Only in Florida could you have new urbanism without the urban.

"In 20 years of experience, this is the most sophisticated planning I've seen," state planner Charlie Gauthier said at the time.

"Horizon West ... is a perfect example of how government can encourage development without encouraging urban sprawl," said our editorial board.

They were about to put 60,000 people in the middle of nowhere, all without encouraging urban sprawl.

New urbanism has become a virus that spread the illness it was supposed to cure.

This is not to say Horizon West, or at least the part of it that has been built, is hideous. It is what it is: a network of sprawling commuter subdivisions far from any urban center.

There is little mixing of homes, condos and apartments, as you see at Baldwin Park. There is no coherent whole created from a tapestry of different parts.

"It has not developed into the vision we all wanted," says Rick Geller, a county Zoning Board member appointed by Commissioner Scott Boyd. "People were expecting Horizon West to look like Baldwin Park or Celebration. But instead it looks like suburban sprawl."

Like Avalon Park to the east, the homes went in at Horizon West, but the job centers did not. And so people drive to work, often long distances on the expressway. To ease the traffic jams, rural two-lane roads such as County Road 535 are being expanded into four-lane thoroughfares.

They slice the development into pieces-parts.

County ordinances require walls for developments situated on these roads.

A guiding principle of new urbanism is that you put the stores in village centers, creating easy access for residents living around them. This was done at Baldwin Park.

On a tour of the place, I saw a total of two people on sidewalks.

In some developments, they even left out the back alleys — a big no-no in new urbanism. Instead of quaint homes and front porches facing the street, there are lines of garage doors and wide driveways. The reason for this, of course, is that alleys take up land that developers don't want to give up.

As Geller explains, Baldwin Park was built by one developer with one plan. Horizon West has dozens of landowners, developers and builders, each looking to maximize return on investment.

Baldwin Park also has the advantage of being in the urban core, with the roads and infrastructure in place. There are no thoroughfares cutting through it.

Geller led a charge to scale back plans to widen one road. He wants curbside parking to lower speeds and make it more pedestrian-friendly. Boyd wants to move a proposed high school closer to residential areas.

It seems too little, too late. But Geller says most of the development remains to be built — including the main town center — and can be improved upon.

"If we're going to have sprawl," he says, "I'd like it to be new-urbanist sprawl."