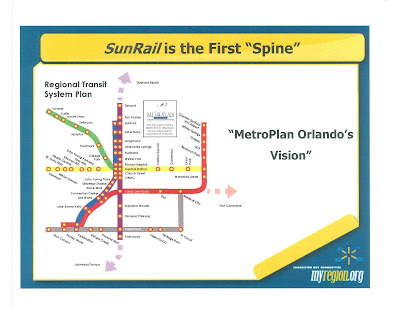 If the links in the right-hand column under "Rail Transit Ridership Surging" hold true, SunRail's ridership will exceed expectations.  Estimates place ridership at about 7,500 daily passengers after completion of Phase I. One lane of I-4 during rush hour accommodates about 2,500 vehicles.

SunRail's capital cost to State and Local government--$600 million--is roughly the cost of building a freeway cloverleaf interchange. I don't recall comparable debate over constructing the 429/Florida Turnpike interchange a few years ago or any similar highway infrastructure.  We accept spending tax dollars on roads without serious question.  (UPDATE 9/21/10--The Orlando Sentinel is reporting the cost of connecting the Wekiva Parkway to I-4 is $450 million.)

The debate over SunRail, Tri-Rail, and rail transit in general revealed a fundamental misunderstanding about transportation subsidies.  Opponents describe highway and road spending as an "investment" while describing mass transit spending as a "subsidy" for "losses." The reality is that taxpayers highly subsidize all forms of transportation. According to a research arm of the Pew Charitable Trust, at least 50% of federal highway spending is subsidized (not counting gas taxes, classified as user fees). We "lose" quite a bit on roads, even locally. A few years ago, Orange County was spending $350 million annually on road construction and maintenance. That figure was down to around $155 million the last time I checked, but still represents a large sum, and does not include the roadway spending of all Central Florida muncipalities. The cost of drive-only sprawl is not cheap.

We don't have the resources to build enough roads to support demand as the decades unfold.  Between 1980-2000, vehicle miles traveled increased 76%, while highway lanes increased 1.5%.  Our drive-only sprawl patterns have resulted in the congestion that wastes more than a week of our time every year, imposes enormous hidden costs on the economy, and takes us away from our families.  Either we pursue the vision in the map above, or it gets much worse. 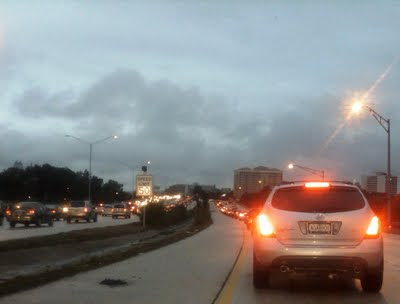 50 mph sign mocking drivers at a standstill on I-4. 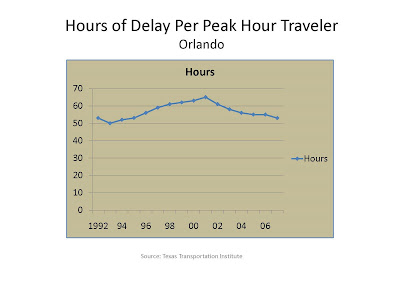 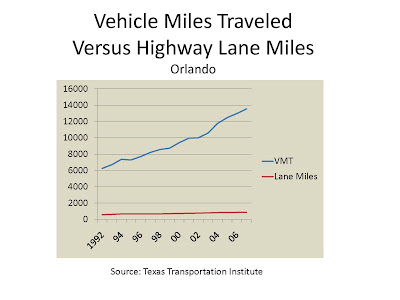 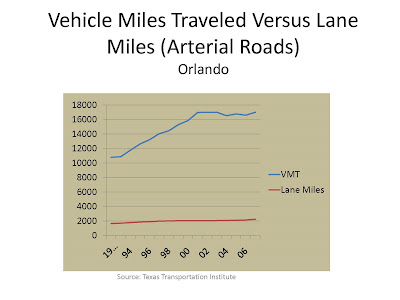 Construction of the 429 and 417 beltways have taken vehicles off Central Florida's arterial roads, helping to hold vehicle miles traveled fairly steady on arterials this decade, but at a cost to drivers in expressway tolls.  The Orlando/Orange County Expressway authority collected about $205 million in tolls for its entire system in the fiscal year ending June, 2009. 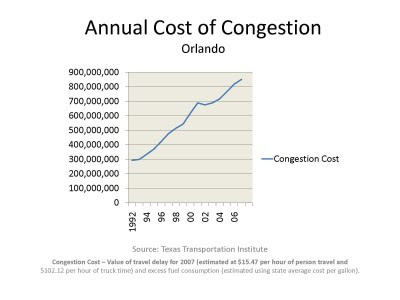 The hidden cost of traffic congestion is over $800 million annually for the Orlando area, according to the Texas Transportation Institute's assumptions.
Click HERE for the data underlying these charts.
Click HERE for a MetroPlan transit vision map.
at 11:49 PM