A Roundabout As a Potential, Long-Term Solution for Wallace Road and Dr. Phillips Boulevard 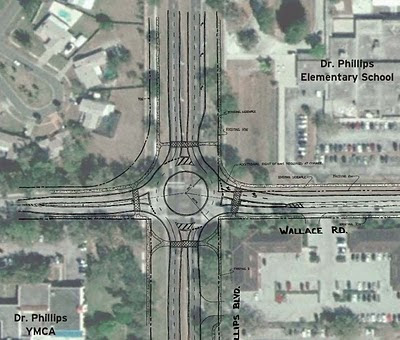 Concept Drawing for a Roundabout at Wallace Road and
Dr. Phillips Blvd. (Courtesy: Canin Associates)
Click HERE to link to a presentation to Orange County staff made by Billy Hattaway, VHB's Florida director of transporation planning, Jurgen Duncan, Canin's transportation planner, and myself on March 11, 2010.  The presentation includes data from a computer simulation conducted by a senior VHB traffic engineer, which demonstrated that a roundabout would significantly reduce driver delays during the afternoon rush hour.

After the meeting, I sent Commissioner Boyd the following email:

Thank you for attending yesterday's meeting with David Heath, [public works director ] Mark Massaro, and public works staff.  Billy Hattaway, P.E., VHB's Florida director of transportation planning, Jurgen Duncan, Canin's transportation planner, and I were grateful for the opportunity to present our proposal for a a roundabout feasibility study for the intersection of Wallace Road and Dr. Phillips Boulevard.  A roundabout could alleviate congestion, improve the area's aesthetics, and provide a safer environment for children walking between Dr. Phillips Elementary School and the Dr. Phillips YMCA.

Unfortunately, it appears we began our effort too late, and the budget contains too little money for a roundabout.  As explained below, my recommendation is that public works should proceed with the road widening in the short-term, while considering a roundabout as a long-term solution.

The Case for Road Widening as an Interim Solution

Mark Massaro presented a good case that funds for the additional lanes are available immediately for relief to motorists while the County budget lacks the larger funding necessary for a roundabout.  Public works accepted bids for the additional lanes on March 2, 2010, receiving a low bid of $127,992, significantly less than the $230,200 budgeted for the work. The City of Orlando provided Orange County with $100,000 for intersection improvements as a result of litigation between the Orange Tree HOA and Pulte Homes.  Childrens' Legacy Program funding will cover the balance.  Long term, the intersection needs mast arm traffic signals, which will cost at least $250,000.  (UPDATE: Public Works advises the cost is $200,000-225,000).  However, the County has no short-term requirement to incur that expense.

Engineering plans call for adding right-turn lanes on Wallace Road and Dr. Phillips Boulevard and extending the northbound left-turn lane on Dr. Phillips Boulevard.  The intersection is congested during peak hours (in part due to the multiple traffic signal movements).  We learned yesterday that the right turns account for about 30% of the traffic movements.  Therefore, the new lanes should provide relief for at least for a few years until enough motorists divert their travels from Sand Lake Road's congestion.  I was glad to see, based on our closer review of the engineering plans, that the additional right-turn lanes will not increase the pedestrian crossing distance on Dr. Phillips Boulevard, already at 115 feet.

The Case for a Roundabout as a Long-Term Solution

However, I remain concerned about pedestrian safey at this intersection.  We learned yesterday about 140 children walk the intersection on a typical school day.  In 2006, a pedestrian and bicyclist were involved in crashes.  I met a woman at the Clubhouse Estates Homeowners Association meeting this week whose child was riding a bicycle and hit by a car at the intersection, which she said went unreported.  In 2009, according to information obtained by your staff, the intersection experienced more than forty crashes, including four with injuries and four blocking lanes.

The road widening plans do not preclude what we would propose as a long-term solution for Dr. Phillips' heart: a pedestrian-friendly roundabout. As we discussed, roundabouts slow traffic speeds to 15-20 mph, and virtually eliminate T-bone and head-on crashes.  As a result, roundabouts reduce injuries 76% and fatalities 90% compared to signalized intersections, according to the Insurance Institute for Highway Safety.  In recent years, the United States Department of Transportation has become a proponent of roundabouts in part because, "Slower speeds are generally safer for pedestrians."

With a roundabout, motorists and pedestrians can make eye contact.  When this occurs in Windermere, motorists ease to a stop and motion pedestrians to cross the street.  A motorist traveling at 20 mph will more likely yield to a pedestrian than when driving at 45 mph.  The Windermere roundabouts ended traffic back-ups of up to a mile. 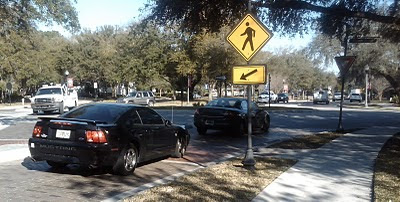 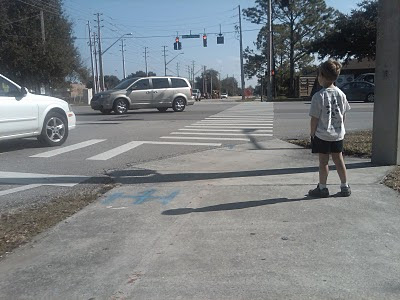 Notwithstanding the four-way, all-red stop condition at Wallace and Dr. Phillips Blvd., the 115 foot wide intersection with 45 mph traffic is intimidating from a pedestrian's standpoint.  The conceptual plan we presented would reduce the pavement distance to two 26 foot crossings to a center split island.  Pedestrians could cross more quickly, reducing motorist frustration.  A roundabout would become an amenity for the Dr. Phillips community--a seam that brings the various subdivisions together as a neighborhood, rather than a fragmenting intersection.

I would encourage you to schedule a community meeting about the Dr. Phillips transportation network to allow a broad-range of residents to have meaningful input into a long-term vision.  If a consensus of the community would like consideration of a roundabout, I would then encourage you to ask the County to conduct the roundabout feasibility study we suggested yesterday. (The County should secure funding for the study from the $100,000 savings between the low bid and budgeted intersection widening.)  If a roundabout appears feasible, we should attempt to secure a Federal Safe Routes to School grant and look for other funding sources. Based on Billy Hattaway and Jurgen Duncan's experience, the study, engineering, and construction of a roundabout should cost between $300,000 - $500,000, depending on the level of amenities and cost of right-of-way acquisition.  Jurgen's conceptual plan required only a small triangle of land for right-of-way acquisition, which the County could swap with the school district for unneeded right-of-way.

Mark Massaro estimated that a roundabout would take several years from concept to completion.  In the meantime, the current road widening will provide some relief to motorists.  I hope that, in the long-term, we can provide a safer environment for the children crossing the 115 foot intersection.

I look forward to working with you and public works to identify other intersections in District 1 that may serve as viable candidates for a roundabout.  I was pleased to learn that staff views the Windermere roundabouts favorably and will consider the possibility of roundabouts going forward.

(UPDATE: 3/22/10--I received heartbreaking news.  The son of friends of ours, an 11 year old, well-liked student at Southwest Middle School, is in intensive care at Arnold Palmer Hospital.  Last Friday after school, a car struck him while he was trying to cross Wallace Road in front of the Sand Lake Hills neighborhood to go to the YMCA.  Please include Daniel and his family in your thoughts and prayers.)
at 12:12 PM