Jumping the Shark on Sprawl 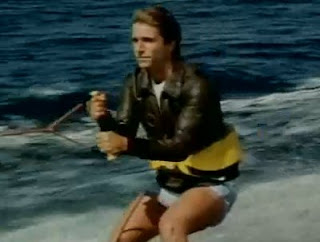 Fonzie about to "Jump the Shark"--The phrase refers to a gimmick marking the downward slide of something once popular that should have ended already.
I told the Orange County Planning and Zoning Board that we've "jumped the shark" on sprawl development.  The Board voted 5-3 to recommend transmittal of Innovation Way East to the Florida Department of Community Affairs.  If ultimately adopted, the Comprehensive Land Use Plan for this area south of the Beachline and east of the beltway in Southeast Orange County would change from Rural to a designation allowing considerable development.
Village B2's gimmick is a "Conservation Zone" of 535 "executive homes" featuring Energy Star appliances, native landscaping, and other "green" elements.  Fran Pignone (appointed by Commissioner Linda Stewart), Marvin Barrett (appointed by Commissioner Fred Brummer) and I voted against transmittal.  Sprawl development such as Village B2 isn't so green.
Village B2 would spread over two miles (measuring top to bottom) at a density of one home per acre.    The East Central Florida Regional Planning Council expressed concern that residents would find themselves two miles from a Village Center commercial area.  That means the residents will drive virtually everywhere.
Innovation Way's policies require mixed-use, "compact villages," designed as Transit Oriented Development.  Transit Oriented Development requires a density of at least 8 residential units per acre.  One unit per acre would not support the transit line drawn on the applicant's map through Village B2.  Village B2 would perpetuate auto-dependent sprawl.
To their credit, Innovation Way East's planner and engineer signaled a willingness to redesign Village B2.  Clustering of development, encouraged by an Innovation Way policy, would preserve more land in a rural and undeveloped form.  I would suggest looking at the development pattern for luxurious, sought-after executive housing in Celebration as a model. 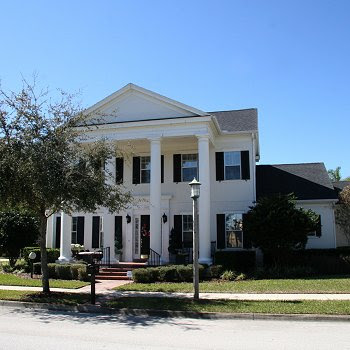 Home in Celebration.  One acre lots aren't necessary for Disney and other tourist area executives. 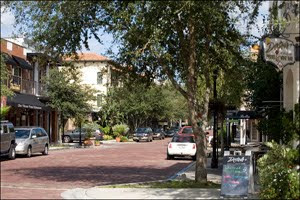 Hannibal Square, New England Avenue, Winter Park, FL--Restaurants and retail below with apartments or condos above.  An appropriate Main Street scale around which to cluster housing at a five minute walk.
****
UPDATE 6/22/10: On 3-3 tie votes, the Board of County Commissioners denied transmittal of the Innovation Way East application to the Florida Department of Community Affairs.  The applicant cannot apply again for two years.
at 7:26 AM