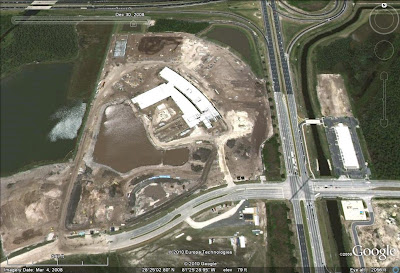 The Darden Headquarters (under construction in GoogleEarth image) sits on an isolated pod, bound by the 528 Beachline Expressway, John Young Parkway, Central Florida Parkway, and the Shingle Creek wetlands.  Employees have no realistic and safe option to walk or bike to work.
In comments published in the Orlando Sentinel, developer Craig Ustler observed that poor land planning can undermine the benefits of LEED energy efficiency certification.  He pointed to the Darden world headquarters--which attained the second highest LEED certification--but which sits on an isolated, drive-only pod bound by the Beachline Expressway and two arterial highways.  Biking and walking aren't a realistic and safe option for Darden employees.   Darden had to incur the expense of providing employees with a gymnasium, bank and other amenities.
Another alternative is to incorporate corporate offices--including headquarters--into an urban fabric.  Here's an aerial view of the Redmond Town Center, in Redmond, Washington, home of the AT & T Wireless world headquarters, a Marriott hotel, and offices for Microsoft: 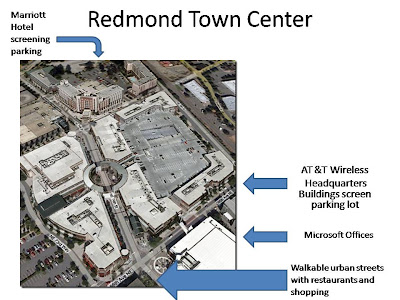 The buildings screen most of the parking lots, a technique used in Baldwin Park and Celebration.  The Marriott Hotel sits at a terminated vista.  Here's a closer view: 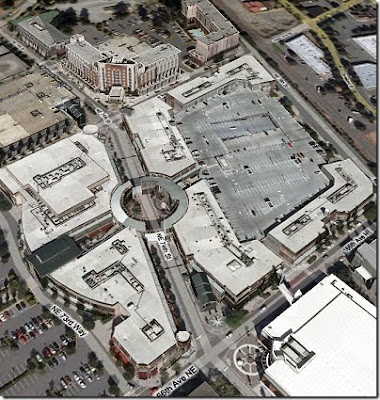 Redmond Town Center
The Harvard Business Review has observed a trend in which large corporations, including United Airlines and Quicken Loans, are moving from suburban to urban locations.  The Review opined that, insofar as attracting talent, "Companies that recognize the larger trend...may gain a competitive advantage in the process."
at 7:05 AM