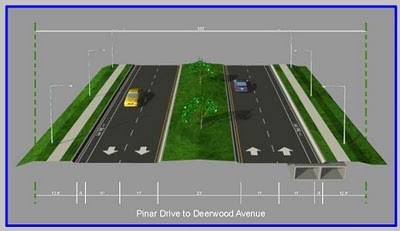 The Orange County Planning and Zoning Board unanimously recommended approval of the proposed four-laning of Lake Underhill Road as consistent with the Comprehensive Plan.

The new Lake Underhill Road will function as an arterial highway.  I expressed concern that the engineering--12 foot wide lanes (as wide as an interstate highway) without curves--will induce speeding far in excess of the intended 45 mph posted speed.  I saw striking similarities with Apopka-Vineland Road, where the road's engineering encourages speeds of up to 60 mph.  When I lived in Dr. Phillips, one of my neighbors died in crash on Apopka-Vineland Road, leaving a wife and toddler.  A year or so ago, the daughter of friends of ours learned one of her classmates died on Apopka-Vineland Road.  Our arterial roads are similar to Afghanistan or Iraq in one regard--they have an acceptable level of casualties we rarely question.

I asked the public works representative, Brian Sanders, if we could achieve speeds closer to the intended 45 mph with 10 foot wide lanes in an area passing numerous cul-de-sac subdivisions.  The following month, Brian presented a revised plan, scaling-down to 11 foot lanes.  As a result, public works said taxpayers will save about $200,000.

I expressed my view that we should require shade trees over sidewalks.  Mr. Sanders said public works should revisit their standard landscaping in view of the County's shift towards multi-modal mobility.  In response to some expression of concern over cost, I said, "Sapplings will be fine."

Lake Underhill Road between Goldenrod and Rouse Roads.
at 9:05 AM