Mayor Teresa Jacobs articulated a vision for Orange County's future of "complete streets and place-making."  At the Orange County Redevelopment Conference on January 20, she said, "I am working closely with County staff on place-making initiatives that bring mixed use, infill development, sustainability, community revitalization, and other redevelopment concepts to life."  She added, "At the heart of redevelopment is economic development and pride of place that make people want to stay in their community."

Galina, director of town planning for the Miami firm, DPZ, is author of the Sprawl Repair Manual.  She said, "We love our downtowns, but a lot of people work in the suburbs so it makes sense to re-balance them."  She spoke of the need for zoning reform.

Galina advised that slowing traffic and allowing on-street parking are essential elements for place-making.  (This is obvious.  People will sit at an outdoor cafe on Park Avenue, but not on S.R. 17-92).  In Galina's words, "Fast traffic kills real estate."  She urged Orange County to allow the full spectrum of thoroughfares once prevalent in urban areas.  For example, she showed graphics of an arterial or collector highway transforming into a pedestrian-friendly multi-way boulevard.  Such a boulevard separates thorough traffic from slower local traffic and on-street parking. (The County should configure New Independence Parkway, in the Horizon West Town Center, as a multi-way boulevard or avenue with on-street parking).

Galina showed how a developer could retrofit a dying shopping mall into a desirable urban environment:

She showed precedent for her proposal--Mashpee Commons on Cape Cod, Massachusetts.  Here are the images: 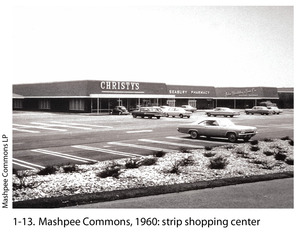 Galina said one of Orange County's biggest challenges is the out-migration of young people.  She opined, "The young generation won't stay because of Disney."  Another presentation, by economist Gregg Logan of RCLCO, demonstrated that young people want more urban experiences.

Hazel Borys, principal and managing director of the firm Placemakers, worked with Canin Associates in developing a form-based code to improve and redevelop Fairbanks and S.R. 17-92 in Winter Park.  (Today I suggested to Mayor Bradley that the City "pull it off the shelf.")

Borys asked the audience of hundrds how many would allow their 7 year olds, if they had one, to walk alone down the street.  Only 20% of the audience raised their hands, which doesn't say much for the safety of thoroughfares we've created.  She said the character of streets must change as they enter into urban areas.  From a governmental viewpoint, she said that a mixed-use mid-rise development will generate 25 times more tax revenue than a suburban Wal-Mart on a per acre basis.  She also linked higher WalkScores to higher home values.
at 4:26 PM