When Central Florida's history is written 50 years from now, after transit has finally reached maturity, someone might want to title it, Conquering Orlando, and describe John Mica's pitivol role.  "We think what you've accomplished will be transformative," Professor Rick Foglesong told the Congressman.

Congressman Mica sees SunRail linking to the Orlando International Airport linking to high speed rail.  He said the 110 miles an hour average speed of the Florida East Central Railway--which will link OIA to Miami--will exceed that of Amtrak's Acela line.

"How do you link to the apartments and businesses on Maitland Boulevard?" he asked one of the planning students who presented a vision of Maitland's "park and ride" SunRail station and parking lot transforming into a vibrant, urban Transit Oriented Development.  Mica sees a critical need for east-west Lynx bus service to ferry riders to SunRail's spine.

He criticized the lack of bus shelters in Florida's blistering heat.  Congressman Mica even painted an amusing picture of himself sitting on an overturned shopping cart waiting for a bus to the airport, after his wife dropped him off.

If the students expressed any disappointment, it was with Congressman Mica's skepticism of the viability of walkable Transit Oriented Development.  "It's brutal," he said of Florida's hot, wet climate.  He questioned whether people would walk even one block from the train to a parking garage.  (The separation of the train and parking would economically energize the block in between, much like the separation of Universal's parking and theme parks economically energizes City Walk.)   The irony was that Mica expressed skepticism about walkable development a few stone-throws from beautiful Park Avenue, perhaps Central Florida's most successful business district.  Florida's summers are no more brutal than winters in New York City, Washington, Boston, or any number of walkable cities.  People will walk when something makes walking worthwhile.   The students envision a built environment more worthwhile than what currently surrounds the future Maitland and Altamonte Springs SunRail stations.  To his credit, Congressman Mica has publicly supported transit oriented deposition for its potential to involve the private sector and generate revenue.  He has also sponsored federal legislation making such projects eligible for federal grants and guarantees. The Washington Metro is now looking at Transit Oriented Development as a revenue generator, a worthy model for SunRail to fund operations and capital costs.

During a question and answer session with Rollins undergraduates later that evening, someone asked Congressman Mica about the fact that young people are driving less.  This question brought the Congressman's visit to Rollins around to a full circle.  Walkable development creating exciting urban environments in Central Florida could keep many of our children from moving to New York and Washington, as many presently intend.  The Master of Planning students are on the right track.

Here's a LINK to the Rollins College write-up of Congressman Mica's visit. 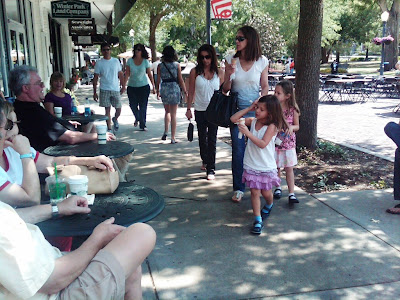 Strolling on Park Avenue near Winter Park's future SunRail station.
at 10:54 AM