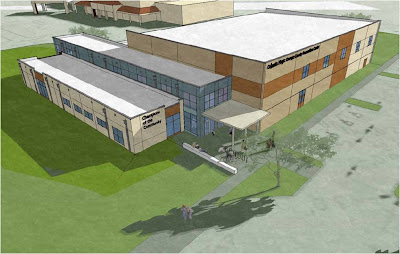 A Magic Gym is Planned for Our Park - Who’s Idea Was That ?
By Robert Kelly

Somehow the County did not understand when your HOA board and the Southern Dr. Phillips Homeowners Coalition told Teresa Jacobs (our County Commissioner from 2000-2008) that we did not want the gift of a free Magic Gymnasium in our Dr. P. Phillips Community Park.

Commissioner Jacobs acknowledged our decision and said she had a needy West Orange County location instead. Other plans had been discussed by us from the beginning for Phase 2 of the park, such as boardwalks, trails, health circuits in keeping with its natural habitat and buffer with the surrounding neighborhoods. Since she vacated her seat, Scott Boyd, the new Commissioner, was reminded when he asked us the same question. But the Parks & Recreation Department has already been spent money to survey our park and intends to build this gym.

The Magic Gym will be over 24,000 square feet, with 100+ parking slots and two bus spots. This is similar in size to the Dr. Phillips YMCA. The building will contain a full court basketball and volleyball gym, a weight room, two activity rooms, a game room and locker rooms. The facility will be open later than the current park closing hours, and will host many functions such as competitive and recreation basketball leagues, volleyball, teen dances, health classes, teen center, after school camps, and summer camps and other activities for all west Orange County residents. When we asked why here, when we have the Dr. Phillips YMCA and the new JCC opening a mile south, we were told the Parks Department needed to pick a site that they owned. So, why this one? We are not in need of such a facility. Other parts of Orange County are more deserving.

Parks Department offered another strange justification in their interpretation of a flawed survey that convinced the Parks Department that we wanted that Magic gym. Do you remember the Dr. P. Phillips Community Park Phase 2 survey in late 2007? It never asked if we wanted that Magic Gym. Instead it asked about boardwalk, trails, restrooms, picnic pavilions, fitness course, multi-purpose center, recreation programs, meeting rooms, lockers. The 12 options offered in the survey never included a volleyball or basketball gym. The write-in answers are more telling. Out of 1,128 surveys, only 8 asked for basketball (2 said NO basketball) and 6 mentioned volleyball! With no gym mentioned on the survey or the write-in responses, how could they assume we wanted it? And they never told us we were getting what they thought we wanted. So the story and the survey is flawed.

The Magic Gym is an unwelcome hazard to us in the form of continuous day long traffic load, surge traffic at late hours for the sports and teen functions, and the additional cars and pedestrians roaming around our streets and hanging around the path to Sand Lake Point and Sand Lake Cove. The users will be from all over Orange County, Osceola County and tourists. We believe this gym will not be an asset to our community but rather it will be a nuisance and risk.

But we have learned that Winter Garden has the land, public need, and the desire to host this center on a suitable site in a commercial area. We are attempting to steer the gym in that direction.

This HOA has spent hundreds of hours keeping tourist activities and commercial land use away from our homes. We DO NOT want to accept a night time sports and teen facility inside our quiet neighborhood. It is incompatible because the Dr. P. Phillips Park is a "Community Park" designed for the local Dr. Phillips residents, and NOT a Super Regional Park that a Magic Gym would make it. Our Neighborhood already hosts the school, park and soon another 500 new homes along the one two lane 25 mph boulevard.

Say NO THANK YOU to a Magic Gym. Keep the Dr. P. Phillips Community Park a community park as originally promised and DO NOT turn it into a Magic Gym park.

The Orlando Magic is a great organization and will, no doubt, build a first-rate facility. I would like to see the Gym located where the community welcomes it, and where it can serve children who might not otherwise have regular access to a YMCA or a JCC. The Dr. Phillips Community Park site is contaminated with lead, which will reportedly require $100,000 in remediation expense by Orange County taxpayers.
A 24,000 square foot commercial building does not fit the context of a residential neighborhood with 2,500 square foot homes. Therefore, I question the site location, in direct view of homes in Sand Lake Cove and Diamond Cove, without any natural tree buffer.

The City of Winter Garden has long sought this facility. The Orange County Parks Division should suspend the request for construction bids, due in late March, and reconsider whether the Dr. Phillips Community Park location is, in fact, the most appropriate.
at 2:34 PM