Planning for Congestion in the Tourist Corridor 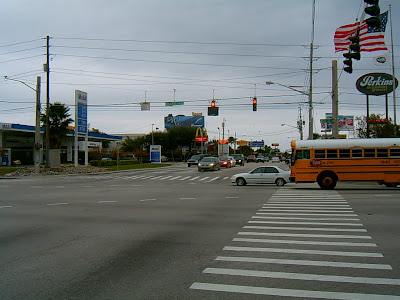 International Drive and Sand Lake Road--Tourist-oriented development based on the auto-dependent sprawl model.  The outcome: poor aesthetics, severe traffic congestion, and a place locals would rather avoid.
Orange County has long-planned tourist corridor development on a segregated use, auto-dependent sprawl model.  Hotels, timeshares, and retail are generally spread-out from each other.  One finds vertical mixed use limited mainly to major hotel interiors.  The tourist corridor incorporates comparatively little housing for workers, though an apartment complex for Universal workers is back on track.  Sign control is inadequate on the Orange County section of International Drive north of Sand Lake Road (pictured above), contributing to poor aesthetics.  Little is pleasant for a pedestrian.
Transit
Mass transit in the tourist corridor is limited.  Most bus stops lack shelter from rain and summer sun.  Lynx bus service to Disney requires a transfer from most parts of International Drive, though few know where the buses go.  The bus stops I've observed do not have maps showing the routes--a simple step that could increase Lynx's ridership.  Lynx could learn from the International Drive trolley: 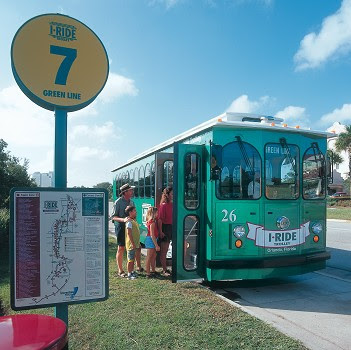 The I-Drive trolley provides no service to Disney or Universal.  No fixed rail or dedicated transit lanes exist yet, though Disney is now offering 50 acres for a high speed rail station.  I suspect Disney has learned much--and benefitted economically--from its experience with EuroRail, which connects Disneyland Paris to major cities throughout Europe.
Road Construction and Traffic Trip Entitlements
Since the 1990's, Orange County's planned tourist corridor expansion has centered mainly on extending International Drive southward into Osceola County and constructing the Palm Parkway.  The latter road, which runs parallel to I-4, acts as an extension of Turkey Lake Road into Lake Buena Vista.  To help fund the Palm Parkway's construction, the County freely awarded traffic trip entitlements and impact fee credits.  Vested average daily trips among the properties fronting the future intersection of the Palm Parkway and the future Wildwood Boulevard connector stand at over 91,000, as demonstrated by the following chart: Properties within a short drive of the future Palm Parkway/Wildwood intersection also contribute traffic to the area, including a WalMart SuperCenter, Dr. Phillips Hospital, and Westgate Resorts.  Future development of more than 1,500 residences on the Kerina property to the north and west will also contribute traffic.  Even when one excludes all of these contributing traffic trips, the number of vested trips at Palm Parkway/Wildwood will far exceed the average daily trips for some of the County's most congested intersections, including Sand Lake and Turkey Lake Roads, Colonial Drive and Semoran Blvd, and Colonial Drive near the Florida Turkpike, as the following chart demonstrates: 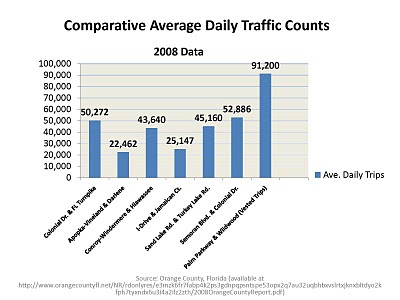 To get an idea of the scope of development at Palm Parkway and Wildwood, click HERE to view a video of the first two of seven timeshare towers built by Hilton on the Marbella PD.
Carter/Hannah Smith Property
Last December, the present owner of Smith Tract 1, Maury Carter and Associates, appeared before the Orange County Planning and Zoning Board to request a land use change allowing replacement of over 600 planned apartment units, including workforce housing, with additional lodging units.  The existing future land uses are Low Medium Density Residential (LMDR), which allows up to 10 residential units per acre, and Activity Center Residential (ACR), allowing 20,000 square feet of neighborhood commercial and workforce housing.  The proposed land use, Activity Center Mixed Use (ACMU), is an intense tourist commercial designation used predominantly in the International Drive Activity Center.
A prior owner, Hannah Smith, made a similar land use change request in 1999, which the Board of County Commissioners rejected unanimously.
The following map shows existing future land use: 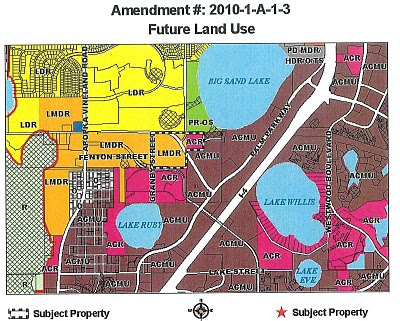 The heavy dotted line denotes the Smith/Carter property, about midway between I-4 and Apopka-Vineland Road.  Wildwood is the middle connector road between Palm Parkway and Apopka-Vineland.  Low density single family homes (LDR) and the Dr. Phillips Community Park (PR-OS) border the property to the north, low-medium density residential (LMDR) to the west, and tourist commercial uses (ACMU and vested ACR) to the south and east.  The International Drive Activity Center encompasses the ACMU land use.
To entice the County to allow the land use change, Maury Carter and Associates offered 175 feet of buffering from single family homes in Dr. Phillips, more stringent height limitations than required by the Buena Vista North overlay ordinance, as well as tree preservation and plantings.  (The offer was similar to a deal I had tried to make with Ms. Smith on behalf of the Dr. Phillips neighborhoods in 1999.)  The applicant argued that lodging use would decrease vehicle trips northbound on Apopka-Vineland Road compared to the number of trips residents living in apartments would take and, further, would have no impact on school attendance.  The applicant made good arguments and I wrestled with how I would vote.
I ultimately determined the application was inconsistent with Orange County's comprehensive land use plan.  The comp plan contemplates a residential transition from the core of the International Drive Activity Center.  The Evaluation and Appraisal Report approved by Orange County last June, states on page 59:


Transition areas should be an intervening area between the intensity of the core and the less intense surroundings and contain more residential uses than the core.

In addition, "[T]he County is seeking...integration of higher residential densities around employment centers and commercial districts to achieve a greater balance of land uses" as well as "[o]pportunities for affordable housing." (p. 229).

The present ACR parcel "facilitates residential development in proximity to employment areas to minimize travel distances between uses" and is "[i]ntended to promote workforce housing for tourist-oriented employment."  (p. 34).  Workforce housing on the Carter/Smith property would attract families whose children would attend the excellent schools in Dr. Phillips, and would buffer low density residential development in Dr. Phillips (long a concern of the Southern Dr. Phillips Coalition leadership, who were opposing the application).  Given the large number of vested vehicle trips, Palm Parkway/Wildwood would benefit from workers living within walking distance of their employment (especially if residences are interconnected with the adjacent, future hotel, timeshare, and retail development).  I urged the Commissioners to view our land-use decisions with a twenty-year, long-term time horizon, instead of a real estate investor's shorter time-horizon (whose goal is to increase entitlements and sell for a profit).  I did not view eliminating all residential uses as wise or as "smart growth."
My motion to deny the requested land use change as inconsistent failed on a 3-3 vote (technically no action).  Another Commissioner's motion to approve of the land use change to ACMU also failed.  The request now heads to the Board of County Commissioners for consideration without a recommendation from the Planning and Zoning Board.
Given the very large number of traffic trip entitlements conferred on Palm Parkway/Wildwood corridor landowners--and the probability of traffic concurrency ending--Orange County has little choice but to utilize mixed use strategies (including residential) to internally capture traffic trips, establish interconnectivity between uses off arterial roads, and pursue meaningful mass transit options.  The alternative may be some of the County's worst congestion yet.

(JAN. 26, 2010 UPDATE--Maury Carter and Associates withdrew the application before the Board of County Commissioners could act on it.)
at 8:47 AM