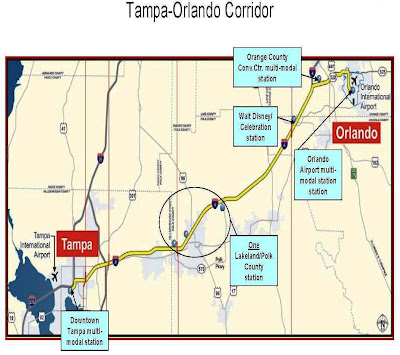 This map submitted to the United States Department of Transportation for high speed rail funding omits an intermodal connection to SunRail commuter trains.  The legislature approved SunRail after the submission.
Florida's application for High Speed Rail--submitted before the legislature approved SunRail--proposed two intermodal stations in the Orlando area for connections to other transporatation--one at Orlando International Airport and the other at the Orange County Convention Center.  The application, however, left open the possibility of an intermodal connection with SunRail.  Final plans should include it.
United States Secretary of Transportation Ray LaHood wrote on his blog about the various high speed rail grants:

We know that people already want to travel between these cities; we're here to begin making that downtown-to-downtown travel significantly easier, faster, and more productive.

The Florida Department of Transportation's representative stated to the Florida High Speed Rail Commission, "[T]he SunRail project ties well with the overall objective of high speed rail where you do need to have interconnectivity with the local systems in order for both systems to be productive and beneficial to the communities."
Orlando Sentinel columnist Mike Thomas lampooned the notion of people driving to the Orlando International Airport and paying exorbidant parking fees to take the train to Tampa.  A connection between SunRail and High Speed Rail would eliminate the need for many to park at the airport.

The possibility of Lynx bus service between SunRail and the Convention Center and Airport seems wasteful.  The point of rail systems is to eliminate sitting in traffic, not to needlessly create more traffic, especially when the systems will cross each other.

The other proposal for Airport/SunRail/Convention Center transit--a light rail system running parallel to the High Speed Rail line--seems redundant and wasteful.
A connection between SunRail and High Speed Rail would enable downtown Orlando workers and many Central Florida residents to travel by rail to Disney, the Convention Center, the Airport, and downtown Tampa, bypassing our traffic-choked highways.  Likewise, residents from Tampa and Lakeland should have an ability to travel exclusively by rail to downtown Orlando, Winter Park, and beyond.
The significant ridership and revenue that both systems can generate to each other overwhelms the criticism that adding a SunRail intermodal stop will slow High Speed Rail's travel time.  High Speed Rail trains won't travel anywhere near 160 mph between the Airport and Convention Center, with or without a SunRail stop.  Tourist taking High Speed Rail from the airport may endure an extra two or three minutes for a SunRail stop--a pittance compared to the time they will spend in line at Disney World.  The officials who will make the final decisions on intermodal connectivity should ensure that these two very expensive transportation investments provide maximum service and benefit to the people who live and work in Central Florida.
at 2:43 PM