Eliminating Half of Sidewalk At Odds with City Code 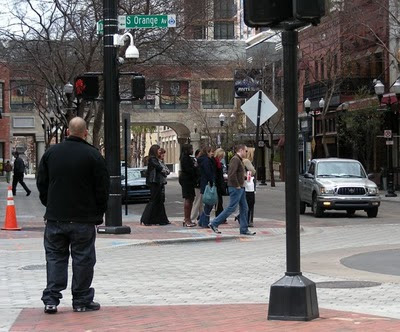 A crowd of pedestrians on the part of a sidewalk slated for elimination for a right-turn lane.  The orange cone marks the traffic signal pole's planned new location.
Mayor Dyer's administration normally is friendly and "gets it" when it comes to implementing walkable urbanism in the City of Orlando.  Perhaps that's why many find the City's plans to eliminate on-street parking and half of Church Street's sidewalk at Orange Avenue so maddening.
This intersection, at downtown's heart, may have some of Central Florida's heaviest pedestrian traffic.  SunRail, the new Arena, and 55 West will combine to increase the number of pedestrians exponentially.
Queues on Church Street rarely amount to more than several vehicles, and Church Street closes to vehicles in the evenings when Arena events will occur.  Traffic load can further disperse by making Pine Street two-way, as City Commissioner Daisy Lynum proposes.

The City is attempting to solve a non-existent problem, and in so doing, will make the public realm more dangerous and less business-friendly.  Cafe Ritazza depends on the on-street parking for part of its customer base.

Eliminating half of the sidewalk is at odds with Orlando's Growth Management Plan's Downtown Element and ordinances, whose goals and policies are intended "to create Florida's Premiere Downtown by...enhancing the street-level pedestrian environment...."  This is no enhancement.
One Orlando City Commissioner informed me he had no idea of the City's plans until he read about them in the Orlando Sentinel.  I would like to see the City reconsider, and, going foward, would ask Mayor Dyer to consider establishing a more thorough means of review for street-widening plans Downtown and in other areas intended for pedestrians.

As a "primary pedestrian street," pedestrian traffic should have priority at Church Street and Orange Avenue.
(UPDATE -- March 1, 2010 -- I received word that, in view of concerns expressed by land planners, transportation engineers, and members of the Orlando City Commission, the City has placed the sidewalk narrowing on hold pending a full evaluation.)
at 2:41 PM