I’m younger this year than last.  Not chronologically, but in terms of my physical fitness and overall health.  When we lived outside of Windermere, I spent 7.5 hours a week commuting to and from work.  I exercised only on weekends, if at all.  I was unmotivated.  My weight hovered close to 180.  My cholesterol gradually got out of control—up to almost 300.  My physician told me I had minor atherosclerosis--hardening of my main artery—a sign of plaque build-up.  The words “heart disease” scared the heck out of me.

I resolved to change my lifestyle, but the time constraints between work, commuting, and taking care of four kids overwhelmed me.

A year ago, we moved to Winter Park, about ten minutes from my office, freeing up six hours weekly.  Since then, I’ve spent the extra time exercising, now alternating between running, bicycling, and weight training.  This summer, I biked my first half-century since I was a teenager--a fifty-three mile ride.  A few weeks ago, I ran my first 5K race, at UCF, finishing in 38 minutes--not spectacular but faster than many college-aged runners.  Not bad for 47.  Between exercise and shifting to a vegetarian diet, I’ve shed about 20 pounds and much of my middle-age belly.  My cholesterol has dropped to around 130.

Consistent weight training—at least twice weekly—has made me stronger.  I’m benching up to 135 pounds, which I did in college.   I’m doing military pull-ups—strengthening my core--for the first time in decades.

Winter Park is far more conducive to a healthy lifestyle than exurbia, where we lived on a loop residential street, cut-off from other neighborhoods by one of those ubiquitous suburban four lane highways.  One former neighbor would bike our subdivision in endless loops.  I could only imagine his  boredom after a few loops.  In Winter Park, the roads are two lanes between my house and the Cady Way Trail.  I’ll spend a typical weekday morning biking 6.5 miles, a good portion on Cady Way and lakeside on the Lake Baldwin Trail.  To mix it up, I’ll run about 1.5 miles on Winter Park’s street grid—gorgeous routes under an oak tree canopy.  On weekends, when I have more time, I’ll bike to downtown Orlando (all on two-lane roads and trails), and return via the Orlando Urban Trail and Winter Park’s beautiful streets.  Recently, I've added an extra mile to my weekend run.   Physical fitness builds on itself.

How did I really turn it around?

I’ll credit a friend from Jacksonville, an attorney, who recommended a book called Younger Next Year. The authors are Chris Crowley, a man in his 70’s, and his doctor, Harry Lodge.  It’s the most motivational book I’ve ever read.  Crowley lives the life of a physically fit senior—skiing, rowing, cycling, and weight training--and urges on the reader in entertaining fashion.  In alternating chapters, Lodge explains the scary biology of aging and how to reverse it, which surprisingly takes less effort than you’d think.  We send our body signals everyday—either grow or decay.  For most of us, exercising six days a week, combined with “not eating crap,” can delay 70% of the decay and disease associated with aging until close to the end of our lives, according to Lodge.  The authors put out an edition for women.  (Crowley followed-up with a diet and exercise book, co-authored with nutritionist Jen Sacheck, Thinner This Year, but I'd first start with one of the original books).  Highly, highly recommended.  Five stars.  Among the best ten bucks you’ll ever spend. 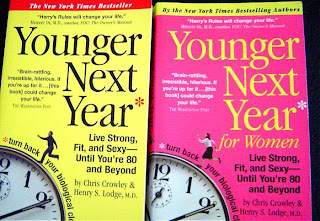