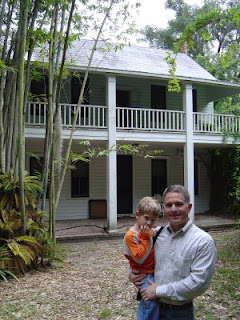 "Nehrling Gardens is one of Orange County's most historic sites," Geller said. "President Theodore Roosevelt, Harvey Firestone, Thomas Edison, and Henry Ford all visited the Gardens to marvel in their beauty and to see the botanical experiments of Henry Nehrling. Due to development pressures, only six acres remains of what was once dozens of acres of gardens."

Nehrling was "world reknown in his day," Geller wrote to Rep. Cannon, and is "responsible for much of what we see today in Florida's subtropical landscape."

About two years ago, the Orange County Commission rejected matching funds for the property's acquisition. "I would like that vote to have gone the other way," Geller said. "We have too few preserved historical sites in the County."

The Henry Nehrling Society, a group of volunteers, began seeking alternative source of funding to acquire the historic site. They applied for an historic preservation grant from the State of Florida.

"The Nehrling acquisition grant proposal ranked number 19 among hundreds, and was the only proposal to make the list from Orange County," Geller said.

Geller wrote to Rep. Cannon that funding at least $6 million in historic preservation grants, about half of the usual funding level, would stimulate jobs as historic sites are rehabilitated.

"Beyond economic benefits," Geller wrote to Rep. Cannon, "I'm asking you to help preserve a small but significant piece of 'Old Florida' for your kids, and mine, to enjoy and appreciate. You will be the hero of Gotha and Windermere."

The Geller campaign received word from Rep. Cannon that he is looking out for the project, but is expressing caution due to the State's severe budgetary constraints.

"If we need to go back up to Tallahassee again next year to seek this funding," Geller told members of the Nehrling Society, "I will be there with you--as your Commissioner."
at 7:51 AM